The boxing promotion firm of Asamoah Gyan, Baby Jet Promotions have announced that they have terminated their contract with top-rated Ghanaian boxer Emmanuel Tagoe with immediate effect.

In 2018, the boxing syndicate entered into a contract with the former International Boxing Organisation (IBO) Lightweight Champion on a three-year deal to be his manager and official promoter.

The contract which was expected to end in November this year has now been terminated prematurely.

“The above named Promotional and managerial outfit acting per its PRESIDENT Mr. Asamoah Gyan wishes to inform YOU, the Ghana Boxing Authority, and all stakeholders that the existing Promoter-Manager/Boxer agreement between me Mr. Asamoah Gyan and you Mr. Emmanuel Tagoe is TERMINATED with immediate effect,” part of a press release from the boxing firm has said.

It adds, “This takes effect immediately. Whilst thanking you for your working relationship with us during the times past, we also wish you the best of luck in your future endeavors and pray that your next promoter-manager will have for you the kind of care and love we had for you.” 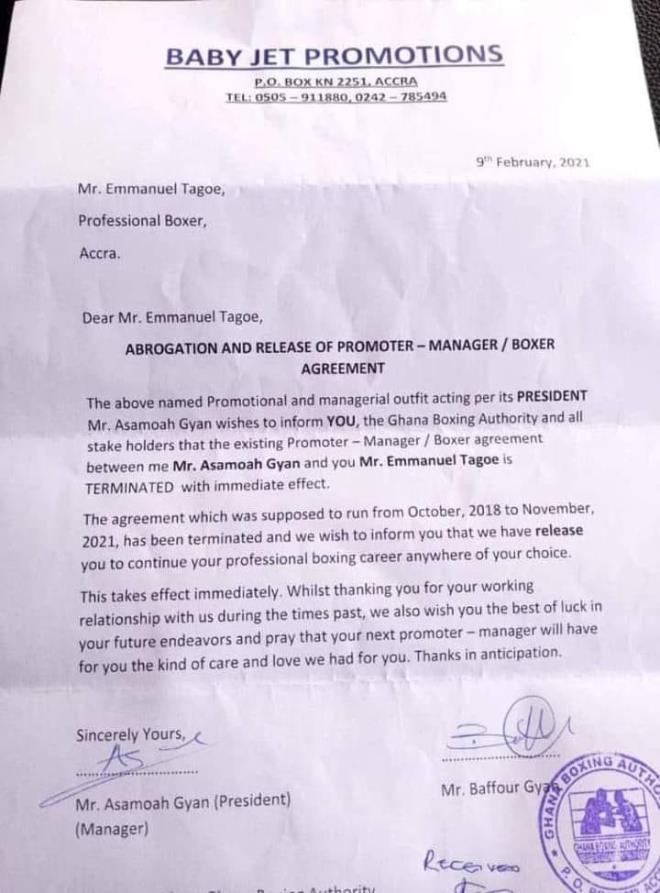