Ghana Premier League outfit Asante Kotoko have received a major boost in their attacking line following the arrival of Michael Vinicius in Ghana on Friday. 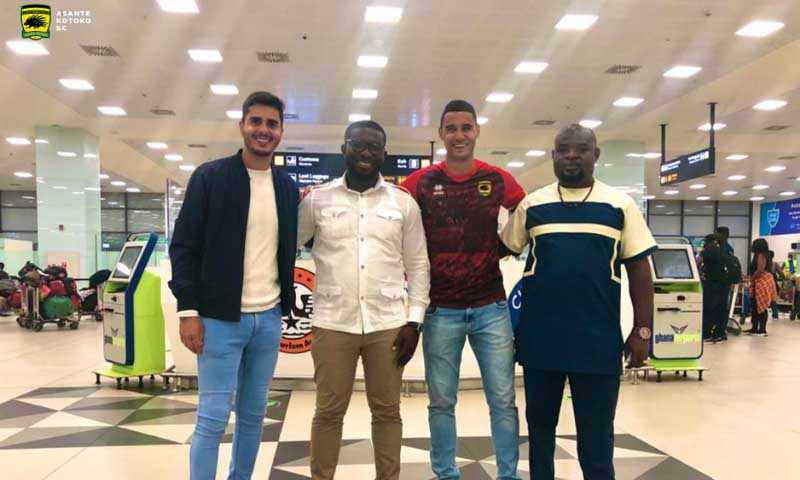 The Ghana Premier League is on half-round break set resuming mid next month with key of Kotoko players out to national duties. The club have been in preparation for the return of the league beating lower tiers Ebony and Gold Coast Academy in training matches.

Preparations have commenced without the presence of first choice Razak Abelora, Christopher Nettey, Abdul Ganiyu, Yusif Mubarik, Imoro Ibrahim who are all with the Black Stars camp.

However, the good news is that all Kotoko’s latest signings with the exception of Michael Vinicius have been involved in Kotoko’s training matches. Solomon Sarfo Taylor who was signed on a 3-and-half seasons netted in his debut training against Ebony and added another against Gold Coast Academy.

Another new signed Andy Kumi who was transferred from Unistar Academy scored in the second game against Gold Coast Academy at Adako Jachie training complex.

While the involvement of Sarfo Taylor and Kumi is good news for Kotoko fans, the arrival of Michael Vinicius from Brazil dealt a major squad boost for their squad especially the attacking department.

The Brazilian has already completed a 2-and-half transfer while still in his native country but has finally landed in Ghana on Friday night to start his campaign with the African giants.

Michael Vinicius who is not a family member of Real Madrid star Vinicius Jr. started is football career at Rio Petro in 2010 before joining Fluminense youth side in 2011.

The 27-year old rose to prominence at FC Linköping City in 2019 after impressing over his trial period with the Swedish side.  Michael signed a year deal with Linkoping in April and was handed the no. 23 shirt. On the same day as the official announcement – on 19 January – Michael got his debut against BK Forward and also scored in that game.

He netted 14 goals in 19 Premier League games in the Swedish side however, Michael’s last two spells in Iwata Grulla Morioka and Vasalunds IF in 2020 has been a worst campaign failing to score in 9 each games respectively.

The former Fluminense ace has replaced Kwame Opoku at Kotoko who the Ghana International has departed to Algerian outfit USM Alger. Michael will compete with Andy Kumi, Sarfo Taylor, Naby Keita, Andrews Appau and Osman Ibrahim for a starting position.

Vinicius becomes the second Brazilian to join the Reds in the ongoing campaign after the arrival of Fabio Gama at the start of the season.