Furious Manchester United fans stormed the Old Trafford pitch ahead of today’s game against Liverpool in protest at the Glazers’ ownership of the club, with the match protest as a result.

Hundreds of supporters invaded the stadium ahead of the behind-closed-doors Premier League contest to express their anger following plans backed by the Glazer family to join a proposed European Super League, which collapsed soon after. 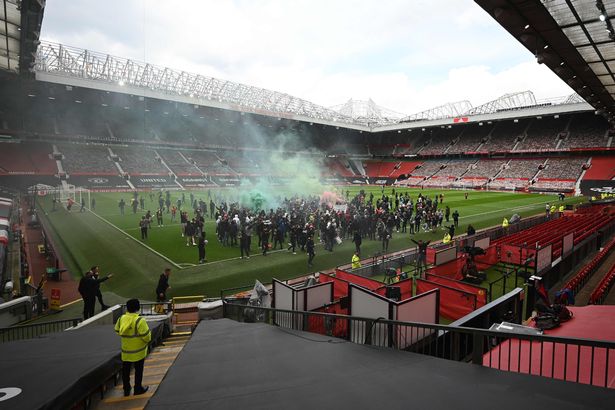 A timeline of events at Old Trafford today

1pm | Fans began congregating outside the trinity statue on the Old Trafford forecourt, as another group started to protest at the Lowry Hotel, where the United team were staying ahead of the game.

2pm | The numbers of protestors swelled to thousands outside Old Trafford, with firecrackers being let off and a group of supporters began to march towards the Munich Tunnel. 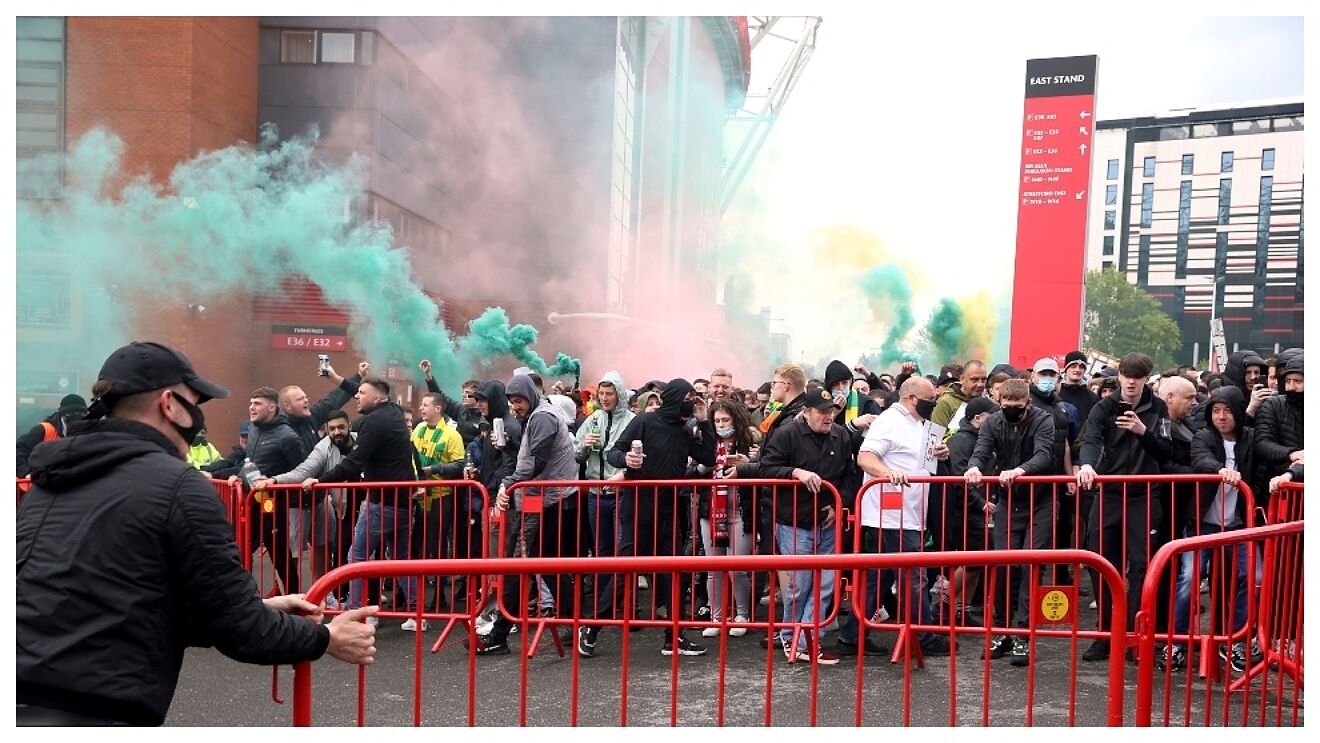 2:30pm | United fans breached security and invaded the stadium, taking to the Old Trafford pitch. Flares were let off, firecrackers were thrown and one supporter was seen wielding one of the corner flags.

3pm | The stadium was in lockdown for a while and the PA news agency understood a meeting was hastily convened to discuss the breached in security. A sweep of the stadium was required and there was said to be damages to the pitch.

3:30pm | Despite mounting uncertainty over the status of the match, the Premier League proceeded to publish the official team sheet one hour before the scheduled kick-off time.

4:25pm | The Premier League issued a statement in which it confirms the match will not kick off at its scheduled start time, adding: “At present there is no revised kick-off time.”

5:40pm | Officials confirmed the game will be postponed. In a statement, United said that, while they accept the right of their fans to protest peacefully, they regret “the disruption to the team and actions which put other fans, staff and the police in danger”.

5:50pm | The Premier League called the postponement “a collective decision”, saying there was “no justification” for the acts of criminal damage and trespass. Liverpool issued a statement saying they are “in full agreement” with the postponement.

GMP Assistant Chief Constable Russ Jackson said: “The behaviour displayed today by those at both Old Trafford and The Lowry Hotel was reckless and dangerous.

“We understand the passion many supporters have for their team and we fully respect the right for peaceful protest. Plans were in place to ensure this could happen safely, but it soon became clear that many present had no intention of doing so peacefully. 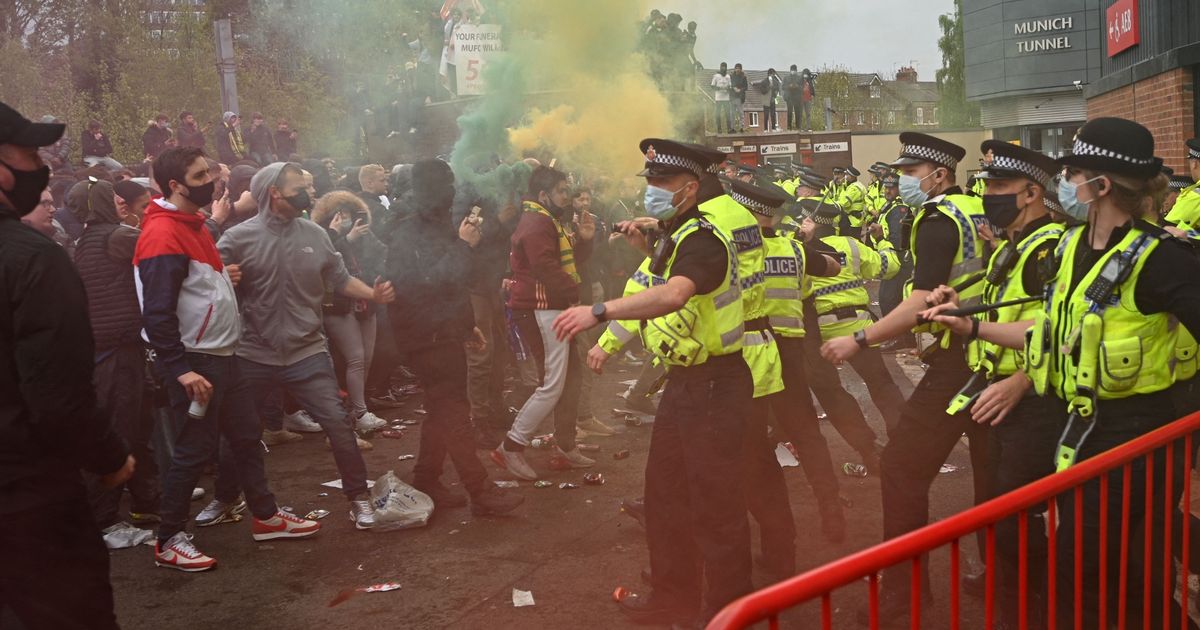 “The actions of those today required us to take officers from front line policing and call in support from neighbouring forces to prevent the disorder getting worse. At different points, bottles and barriers were thrown, officers assaulted and people scaled the stadium structure creating risk for themselves and officers

“We have launched an investigation and we will be working closely alongside partners to ensure we establish the full circumstances surrounding today’s events and prosecute those responsible.”

“Officers were aware of a protest planned to take place in Old Trafford today (Sunday 2 May) and were working closely alongside partners to ensure those that attended were kept safe whilst enabling their right to peaceful protest.

“Early this afternoon, groups of protestors began to gather at Old Trafford and separately at The Lowry Hotel, Salford where the United players were staying. By late afternoon around 200 protestors had gathered outside the Lowry and over 1,000 at Old Trafford.

“Officers continued to closely monitor the situation, engaging with those present but as the groups grew in size; it became clear that many of those present were not intending to exercise their right to peaceful protest. Flares were let off and bottles thrown at officers.

“Protestors outside Old Trafford became especially aggressive and antagonistic towards police before a group of about 100 forced entry to the ground with some United staff having to lock themselves in rooms”.

“Following the security breach at Old Trafford, the Manchester United vs. Liverpool game has been postponed.

“This is a collective decision from the police, both clubs, the Premier League and local authorities. The security and safety of everyone at Old Trafford remains of paramount importance.

“We understand and respect the strength of feeling but condemn all acts of violence, criminal damage and trespass, especially given the associated COVID-19 breaches.

“Fans have many channels by which to make their views known, but the actions of a minority seen today have no justification.

“We sympathise with the police and stewards who had to deal with a dangerous situation that should have no place in football. The rearrangement of the fixture will be communicated in due course.”

In announcing the postponement United said that, while they accepted the right of their fans to protest peacefully, they regretted “the disruption to the team and actions which put other fans, staff and the police in danger”.

The club said in a statement: “Following discussion between the police, the Premier League, Trafford Council and the clubs, our match against Liverpool has been postponed due to safety and security considerations around the protest today. Discussions will now take place with the Premier League on a revised date for the fixture.

“Our fans are passionate about Manchester United and we completely acknowledge the right to free expression and peaceful protest.

“However, we regret the disruption to the team and actions which put other fans, staff and the police in danger. We thank the police for their support and will assist them in any subsequent investigations.

So, the game has been postponed “due to safety and security considerations around the protest”, United have confirmed.

We’ll have the full statement as soon as possible.

When will the match be played now?

United and Liverpool both confirmed that discussions will take place to find a revised date for the game, but the run-in is tight – particularly with United set to play the second leg of their Europa League semi-final against AS Roma in Rome on Thursday night.

United would normally be due to fly out to Italy early on Wednesday May 5th, and could in theory play against Liverpool on Monday 3rd/Tuesday 4th – but the potential risk of a further fan protest will have to be assessed, especially given the police involvement on Sunday. If the game is delayed beyond then, things become more difficult.

Both teams must play their final games of the season on May 23 at 4pm, with that kick-off time set in stone with the rest of the top-flight fixtures that day. United and Liverpool are also both in action on May 19, and games on 8th/9th May respectively make those dates difficult.

Realistically, without moving other fixtures or playing a day before/after another games, four dates – May 3rd, 4th, 14th and 21st – stand out in the current fixture schedule.