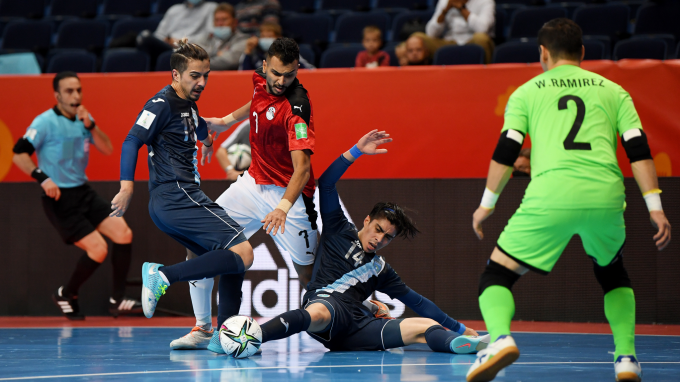 After having reached the Caf Africa Cup of Nations final for the sixth time in their history in 2020, Egypt booked their spot in the Futsal World Cup alongside winners Morocco, and third-placed Angola.

The World Cup finals were set to take place last year but was postponed due to the coronavirus pandemic. The tournament is now taking place between September 12 and October 3, in Lithuania.

The Pharaohs found themselves in Group B along with Russia, against whom they kicked off their journey, along with Guatemala and Uzbekistan.

Egypt suffered a humiliating 9-0 defeat in the opening game against the Russian Football Union and were in dire need of a win in order to keep their hopes of reaching the knockout stage alive.

It took Egypt only four minutes to open the scoring through Mohamed Mansour to have an early lead against their South American counterpart.

Jose Mansilla put the scores back level in the 16th minute, to make 1-1 at half-time. Things seemed to be going downhill for the Egyptians in the second-half as goal by Patrick Ruiz saw them trail 2-1 in the 25th minute.

Tarek Shoola equalized for the Pharaohs in the 35th minute, before Mostafa Eid capitalized on the team’s momentum to make it 4-3 in the 36th minute.

Eid increased his side’s lead one minute later to make it 5-3, before completing his hat-trick in the dying moments of the game to end the game 6-3 in their favor.

Egypt now sit third in Group B, behind Guatemala on goal difference. They will need a win against Uzbekistan in their next game and for Guatemala to lose in order to finish second and secure a spot in the round of 16.