Arsenal came on top of their rivals in the London derby at Emirates with Ghanaian International Thomas Partey impressing in Mikel Arteta’s big win.

Partey displayed outstanding form on Sunday while in action for the Gunners against Nuno Espirito Santo’s side.

The Black Stars talisman started alongside Granit Xhaka in midfield to help Arsenal chase a win against Spurs in a matchday 6 encounter of the ongoing Premier League season.

Recovering to full fitness, Thomas Partey bossed the midfield and was seen linking up play from the defense to the attack in delightful manner.

In a game that produced four goals, the midfielder was one of the bright spots of Arsenal team and deservedly earned a high rating of 7.4 according to detailed statistics recorded by SofasScore in the 90 minutes he played. 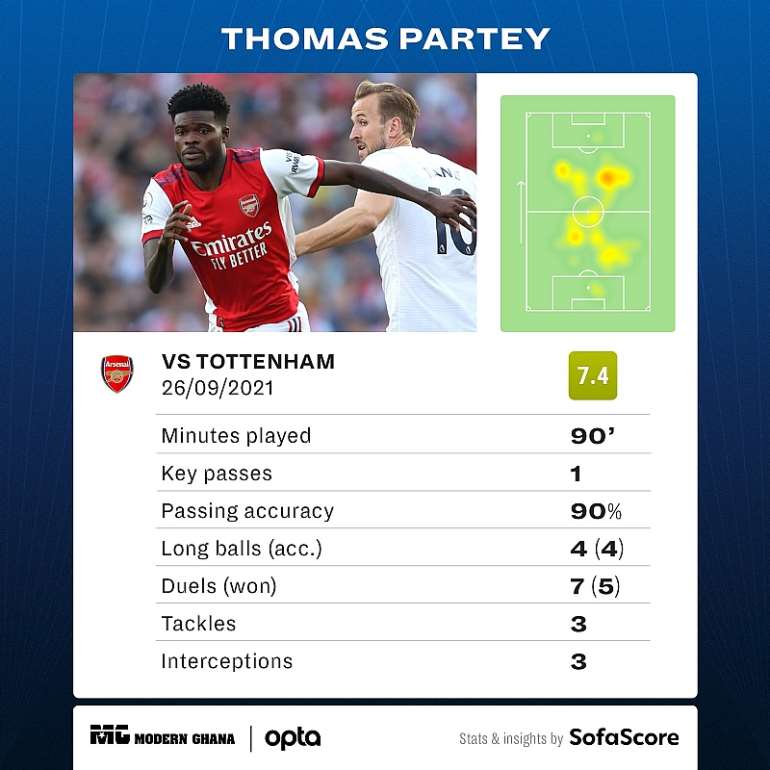 At the Emirates Stadium today, Arsenal needed just 12 minutes to take the lead. Young Emile Smith Rowe scored to give the home team the advantage before goals from Pierre-Emerick Aubameyang and Bukayo Saka ensured the team led 3-0 at the break.

After recess, Tottenham Hotspurs fought and netted a consolation through Son Heung-Min in the 79th minute.

It was however not enough to save the visitors from a defeat in the London derby.