Accra Hearts of Oak midfielder, Caleb Amankwah has promised that the team will make Ghana proud when they face Wydad Athletic Club in the CAF Champions League. 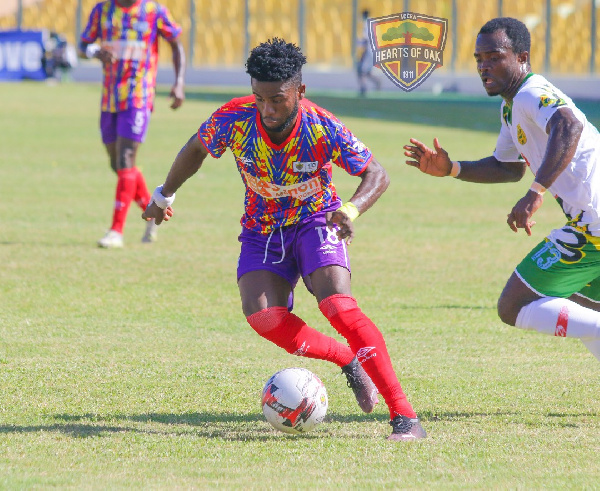 The Ghana Premier League giants will face the Moroccan Champions in a double header clash in the second round of the African elite club competition next month.

Heart beat Guinean side Club Industriel Kamsar in the first round before setting the tricky tie against the North African side who were seeded over the prelims of the Champions League.

The clash poses many doubts in the Ghanaian football media given the past struggles of Hearts of Oak in the competition.

Having won the Caf Champions League in 2000, they have failed to participate in the tournament for over 13-years when they were eliminated by Gabonese side FC 105 Libreville in their last commencement in 2008.

Meanwhile, Wydad Casablanca have surged into a top side over the period playing in the FIFA Club World after winning the Caf Champions League in 2017.

Wydad before that reach the Champions League finals in 2011 before heading stronger into another final in 2019 but were beaten by Esperance de Tunis.

The Moroccan side have played in two consecutive semifinals of the last two Caf Champions League editions; accumulating a strong reputation in the tournament so far.

But Wydad’s pedigree in the Champions League doesn’t bother Hearts of Oak which can be matched with midfielder Caleb revealing the Ghanaians’ intention to crush out the Moroccan outfit when they meet on the 15th October.

Caleb said Hearts of Oak are focused on welcoming the Moroccan side and they will make Hearts fans and the whole of Ghana proud by beating their opponents.

“We will make Accra Hearts of Oak and Ghana as a whole proud. We are focused”.

“I’m fully fit and ready to take part in any crucial activities if my performance at the training grounds is good for the coach selection,” the versatile defender has said in an interview on Tuesday.

Ahead of the clash that the first leg takes place at the Accra Sports Stadium, Hearts new signing Enock Asubonteng has also shared his thoughts which are in line with Caleb’s comments.

“We have got a very strong team which can go on and on (to compete at any level). We’ve got to make sure we prepare right, go in and get ready for the WAC game. That’s what’s important and everyone’s looking forward to it,” Asubonteng said.

“We are very confident (of victory against Wydad), full of belief with the quality of players we have. We will go into every game, no matter who we play, ready to be ruthless in front of goal and defend our box as well”.

“We have done well in big games, against big opponents and it’s another chance for us to go out there and show what collectively we’ve got and what we’re about,” he told the press via GhanaWeb.

Asubonteng may be new at Hearts of Oak but he is familiar with the club’s record against big sides. The Ghana Premier League champions defeated Ash Gold, Asante Kotoko, Medeama Sporting Club and Elmina Sharks in later part of the Ghanaian season.

They added Guinean giants Kamsar to their demolished-team list after recording a 2-0 victory two weeks ago. Beside, Hearts wrote history on their way to glory in 2000 Caf Champions League after avoiding defeat before beating another big gang Esperance de Tunis home and away to lift the Champions League.

They added Zamalek to the list beating the Egyptian side 2-0 to lift the Caf Super Cup in 2001 before adding their country team Asante Kotoko in the 2004 Caf Confederation Cup final winning 8-7 on penalties.

However, they lost 2-0 in the 2005 Caf Super Cup in hands of Nigerian outfit Enyimba at the Aba Stadium in Nigeria.