Olympic wrestler Samar Hamza has clinched the bronze medal in the 2021 World Wrestling Championship, becoming the first Egyptian woman to achieve this feat.

The Egyptian wrestling champion had reached the Round of 16 in the women’s freestyle 76kg event at the Tokyo Olympics, where she lost 12-16 to Vorobieva from Russia in an exciting match that the Russian won at the last seconds.

Following the tournament, Samar had announced her retirement after the defeat, declaring that she’s content with what she has achieved in her career so far.

However, just two months later she went back on her decision to compete in the women’s freestyle 76 kilograms of the 2021 World Wrestling Championships. 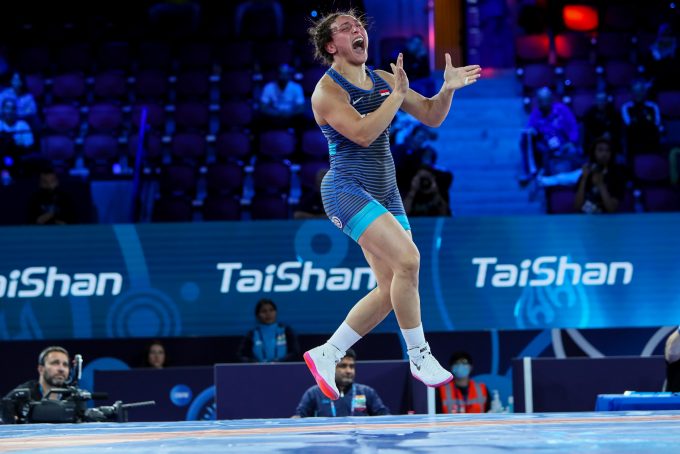 The competition took part in Oslo, Norway, with the Egyptian starting from the round of 16 against Elmira Syzdykova. Hamza beat her Uzbekstani opponent 3-2, before winning against Japan’s Yasuha Matsuyuki 4-2 in the quarter-finals.

The 26-year-old had then a tough clash with eventual-winner Adeline Gray of USA, with the Egyptian losing 11-1 by fall in the semi-finals, but got the chance to play for the bronze medal against Indian champion Kiran Bishnoi in the Repechage.

It was a narrow game, but Hamza won 2-1 to clinch the bronze medal, Egypt’s first medal in the world championship in 15 years since wrestler Mohamed Ibrahim won gold in the 84kg event in 2006.