The biggest source of sports news referred to the Ghanaian International as Arsenal’s ‘midfield boss’ in one of their articles for Arsenal’s Friday Premier League victory over Villa as such moment becomes the first time Partey has been described with such a dominant phrase.

Partey scored his first Arsenal goal as they claimed a 3-1 win over Aston Villa on Friday Night Football; Emile Smith Rowe and Pierre-Emerick Aubameyang were also on target as Mikel Arteta’s side moved into the top half of the Premier League. 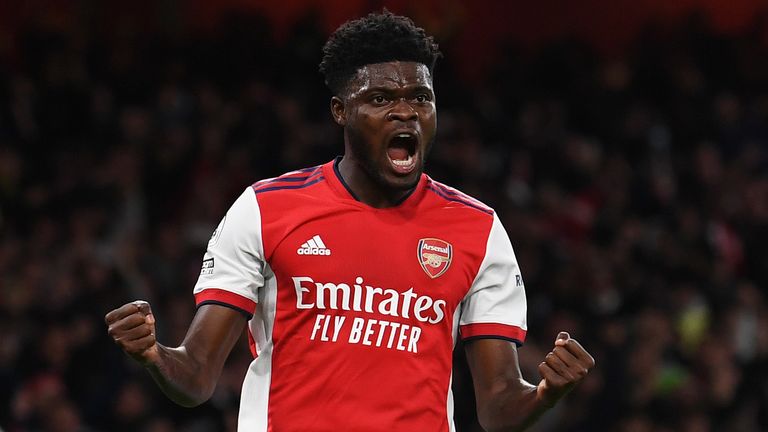 In a sometimes frenzied first half at the Emirates Stadium, when Arsenal were pouring forwards, challenges were flying in from both sides and tempers were fraying, Thomas Partey remained a figure of calm in the centre of the pitch.

Arsenal supporters are still getting to know the 28-year-old following a stop-start first season in England, most of which was played behind closed doors. But this was him at his unflappable best. This was the player the club have pinned so much hope on.

“He is a player who has to be one of the leaders, he has to be the boss in midfield,” said Mikel Arteta last month. He certainly did that here, excelling both in and out of possession and providing a platform for Arsenal’s attacking players to tear the visitors apart.

Arsenal racked up 14 shots before the break, their highest total in a single half under Arteta, and when Partey was not taking them himself – he hit the bar with one close-range effort shortly before his goal – he was starting the attacks from further back.

He was everywhere, in other words, and while his fruitless long-shooting has been a source of frustration for supporters, his long-awaited first goal for Arsenal, headed home from Emile Smith Rowe’s corner, showed a set-piece threat they will now hope to see more of.

It is his distribution, though, that stands out as his best quality and it was evident from the first few minutes of the game, when he slid an incisive pass between Matt Targett and Emiliano Buendia to release Bukayo Saka on the right-hand side of the Villa box.

His ability to break opposition lines is invaluable to Arteta but he does the simple things just as well. There were body feints to give himself a yard of space and clever touches to do the same for team-mates.

At the time of his goal, he had not misplaced a single pass. By the end, he had made more passes, had more touches and made more successful tackles than anyone else on the pitch.

He looked like he was enjoying himself and no wonder.

Partey had to endure more than his share of frustration last season, injuries limiting him to only 18 Premier League starts, and there was more misfortune at the start of this one, a twisted ankle suffered in pre-season causing him to miss Arsenal’s first three games. 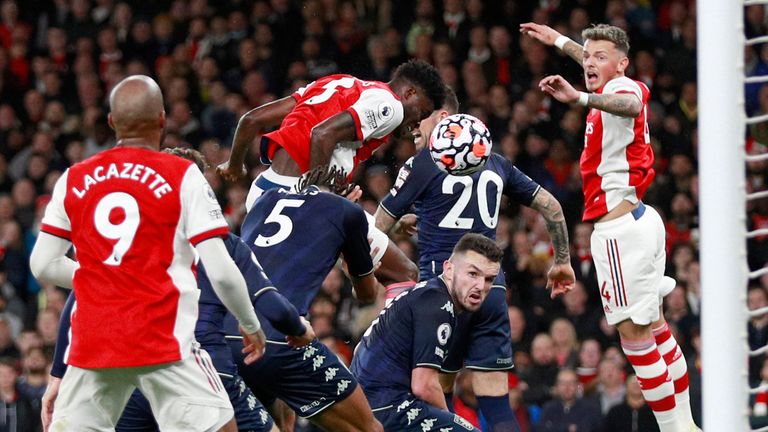 He does that, in part, by making others better. “I think he’s got a different presence,” said Arteta back in January. “It’s not just about his talent and his physicality, it’s who he is as a person. He makes players around him better and that’s a big, big quality.”

He certainly did that on Friday night. Takehiro Tomiyasu had a difficult start at right-back, losing possession on several occasions and allowing Villa to exploit the space behind him, but Partey helped him through it, offering him instructions and staying close to him.

Smith Rowe was named man-of-the-match but Partey had a role in that too, constantly looking for the 21-year-old in possession and providing the service he needed to thrive. No player received more passes from Partey over the course of the 90 minutes.

Much had been made of Granit Xhaka’s absence due to injury in the wake of Monday’s 2-2 draw with Crystal Palace but, having been alone in midfield for much of that game, Partey was helped by the presence of Albert Sambi Lokonga alongside him in this one.

The two-man midfield ensured greater solidity. And while Lokonga has made an assured start to life at Arsenal following his £15m arrival from Anderlecht in the summer, it is no coincidence that his best performance yet came next to Partey.

The Ghanaian was signed for his experience as well as his quality, after all, and that has become even more important given how the profile of the side has changed this season. 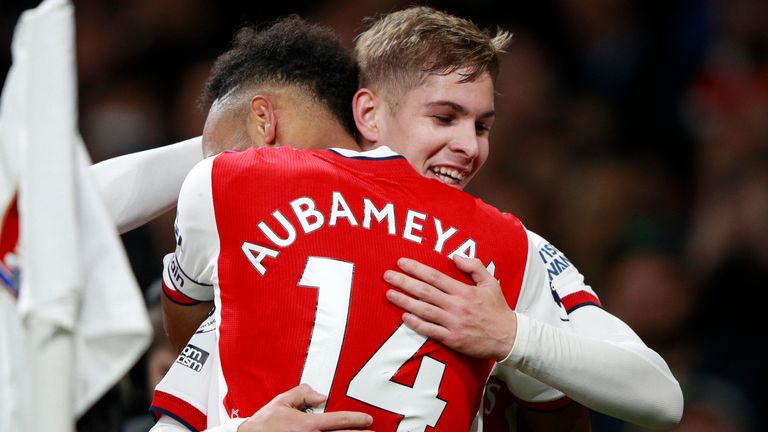 Against Villa, seven of Arsenal’s starters were aged 23 or under, while in Gabriel Martinelli, Martin Odegaard and Ainsley Maitland-Niles, their three substitutes were 20, 22 and 24 respectively.

The youthful make-up of the side adds to the responsibility on Partey’s shoulders, but on this evidence he is more than ready to take it on.

An uncharacteristically weak challenge in the build-up to Villa’s goal was a rare blot on an otherwise excellent performance but Arsenal’s “midfield boss”, their figure of calm amid the chaos, is finally making the impact Arteta always hoped he would.