Al Ahly have emerged victorious 1-0 in their clash against Arab Contractors in the fourth round fixture of the Egyptian Premier League.

Ahead of the game, Al Ahly were second on the league table with nine points from three games, only one point behind Pyramids, who played one game more, while Arab Contractors lied tenth with just four points.

The Red Devils had their eyes set on the Egyptian Premier League summit, which was apperant from the start as Mosimane’s men wanted to snatch an early goal.

However, against the run of player it was Arab Contractors who put the ball into the net through Farouck Kabore in the 13th minute, but the goal was ruled out for offside.

Al Ahly kept piling up the pressure and came so close to scoring, but this time Akram Tawfik’s effort rebounded off the post in the 19th minute.

Just a few minutes before the half-time whistle, Hamdi Fathi thought he broke the deadlock, but his header was denied off the line by goalkeeper Mahmoud Abou-Elsaoud, before the defence cleared the ball away.

Four minutes into the second-half, Arab Contractors were awarded a penalty for a handball on Hamdi Fathi; however after consulting the VAR, the referee overturned the decision.

After that, Al Ahly became much more aggresive and they finally found the winner in the 67th minute through Hamdi Fathi, who rose up high to turn in Ali Maaloul’s corner to make it 1-0.

Just a few minutes later, Percy Tau went through on goal, but was denied by Abou-Elsaoud before the woodwork denied Badr Benoun’s header from another corner form Ali Maaloul.

Five minutes later, Al Ahly’s Badr Benoun was close to double the Reds lead through another header but his ball hit the crossbar.

Arab Contractors nearly punished Al Ahly for their wasted chances in the 79th minute after Mohamed Salem was sent through on goal, but the former Zamalek striker couldn’t put the ball past Mohamed El-Shennawy.

Al Ahly were denied by the woodwork for the third time, but this time it was Hussien El-Shahat, whose shot from a tight angle hit the post, before being picked up by the keeper.

With just a few seconds on the clock, Ahmed Abdelakder and Afsha saw their efforts being cleared off the line, before Luis Hinestroza sprinted past Hamdi Fathi to go through on goal, which forced the Al Ahly midfielder to bring the Colombian down. 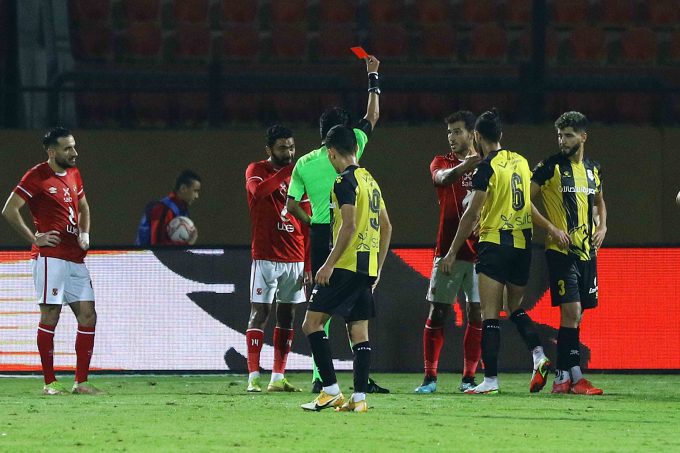 Fathi was shown a straight red card and the resulted free-kick went just inches wide of El-Shennawy’s net for the game to end in a valuable three points for Al Ahly.

The win is Pitso Mosimane’s 50th as Al Ahly head coach, with the South African achieving the impressive record in just 70 games across all compeitions.

Al Ahly have now also won their opening four games of the Egyptian Premier League, the only team to do so this season, as they sit top of the table with 12 points ahead of their next game against Ghazl El-Mahalla away from home.

Meanwhile, Arab Contractors dropped to 11th with four points and their next game will see them host bottom-placed Ismaily, who are yet to collect any point this season.