Ghana international, Daniel-Kofi Kyereh was unplayable on Wednesday night as he put up a near-perfect performance to power FC St. Pauli to an exciting victory against SV Sandhausen.

The forward today started the Matchday 14 fixture of the 2021/2022 German Bundesliga 2 campaign for his team at the Millerntor-Stadion and lasted the entire duration of the game.

Just two minutes into the first half, Daniel-Kofi Kyereh displayed his creative prowess as he set up teammate Guido Burgastaller to score to shoot the home team into the lead.

Staying sharp in the game, the Black Stars attacker found himself in a good position in the 14th minute and made no mistake as he found the back of the net with his effort.

Although SV Sandhausen will pull one back in the 67th minute of the second half, Daniel-Kofi Kyereh killed off the game 10 minutes later when he netted his second of the evening to seal a deserved 3-1 win for FC St. Pauli.

Courtesy of his top performance throughout the 90 minutes, the Ghana forward finished the game with an enviable rating of 8.7, the highest earned by any player at the end of the match. 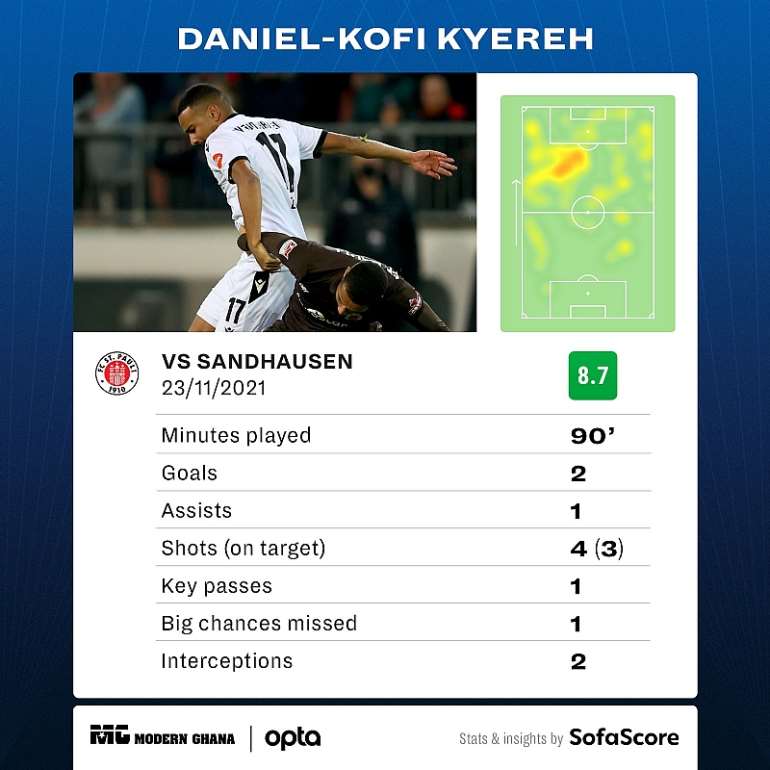 With his assist and brace today, Daniel-Kofi Kyereh has now scored five goals and provided 8 assists for FC St. Pauli in the German Bundesliga 2.

He has featured in all 14 matches for his club this season and looks set to merit a place in the Ghana squad for the upcoming AFCON if he remains in good shape and without injury.