Alexander-Arnold erred twice in the opening 17 minutes to allow Trossard to give the visitors an early 2-0 cushion in Roberto De Zerbi’s first game as Brighton boss.

Roberto Firmino hauled Jurgen Klopp’s side level with a double of his own either side of half-time – but the drama wasn’t over.

Alexander-Arnold’s corner forced Robert Sanchez to punch the ball against team-mate Adam Webster for an own goal to give Liverpool the lead for the first time. But with seven minutes left substitute Kaoru Mitoma’s cross was missed by Virgil van Dijk and Trossard blasted in at the far post.

The result kept Brighton in the top four and Liverpool in mid-table.

There was extra anticipation at Anfield for Liverpool’s first league outing in 28 days but it was Brighton who started on the front foot without mourning the loss of manager Graham Potter to Chelsea.

Alexander-Arnold’s defensive capabilities have been under scrutiny with Gareth Southgate less than three weeks from naming England’s World Cup squad.

After only four minutes, the right-back failed to get enough distance on a clearing header and Moises Caicedo prevented Jordan Henderson from reaching the loose ball.

Brighton’s movement was brilliant around the box. Alexis Mac Allister fed Danny Welbeck and his backheel allowed Leandro Trossard to turn Alexander-Arnold, the luckless Liverpool defender stumbling onto the floor as Trossard finished crisply into the corner.

It got even worse for The Reds after 17 minutes when Alexander-Arnold failed to chest down a clearance and Danny Welbeck nipped in take control.

The former England forward broke forward and crossed low from Brighton’s left and Solly March played a sharp first-time ball into Trossard who struck home with a firm left-footer having been kept onside by Joel Matip.

It was the Belgian’s fourth goal of the season and celebrated wildly by De Zerbi and his staff on the touchline.

Given their dominance, it seemed daft Brighton should let the momentum slip by time-wasting but that’s what Pervis Estupinan did by delaying a throw and receiving a booking.

The volume levels were immediately raised at a deflated Anfield and sure enough after Salah had been denied by Sanchez, Liverpool pulled a goal back after 33 minutes.

Jordan Henderson’s lofted pass was met by a speeding Salah whose first touch as Sanchez came out squared the ball for Firmino to shoot into an empty net.

Initially, it was ruled out for offside but VAR’s check showed Salah was in line with Webster as he raced onto Henderson’s ball. 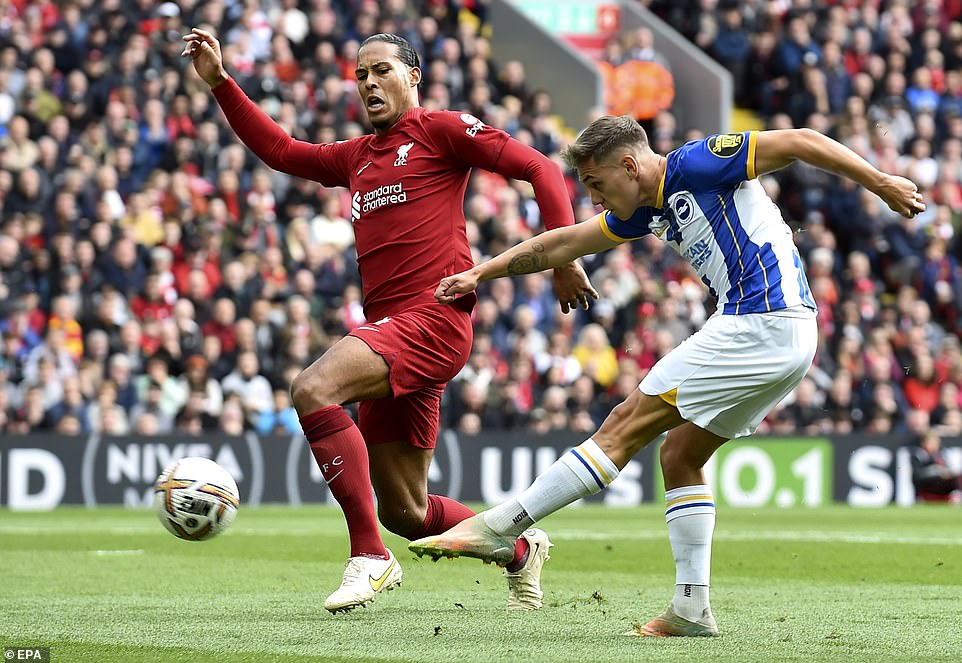 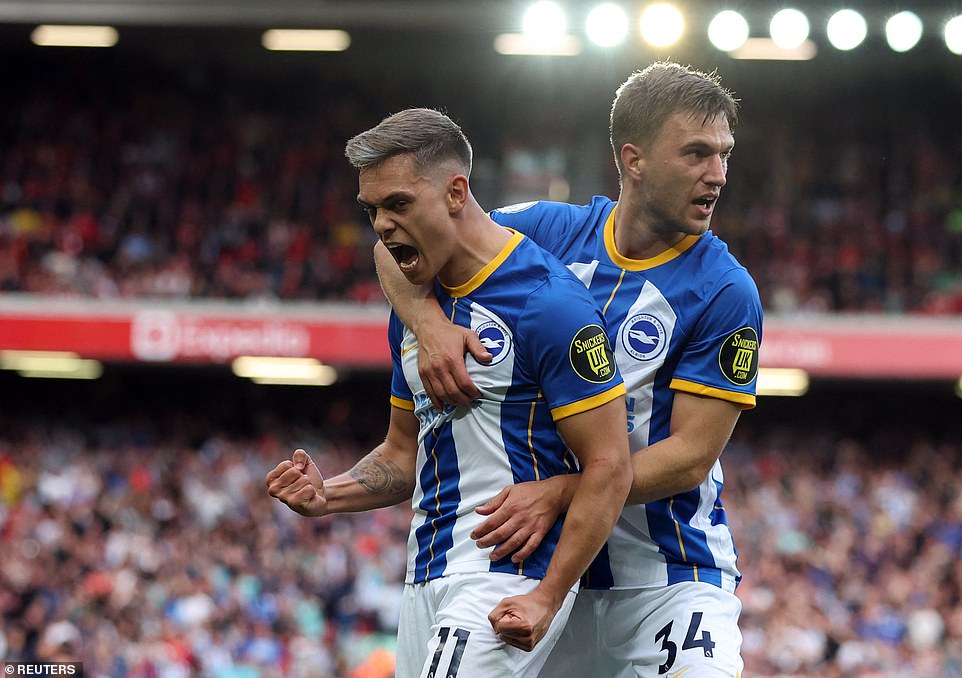 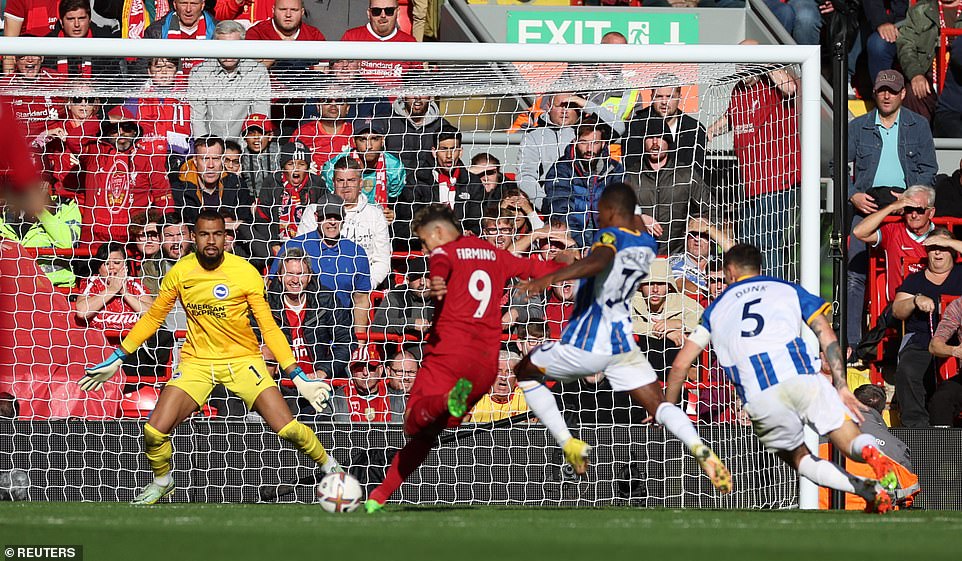 Luis Diaz, who had started on the bench after his midweek excursion to play for Colombia, was sent on by Jurgen Klopp at half-time with youngster Fabio Carvalho making way.

Liverpool were keen to push for an equaliser but remained fragile at the back. An untimely stumble by Matip almost let in Caceido who could have found Welbeck for a tap-in with a bit more composure on his final pass.

It proved costly for the visitors as Liverpool levelled with a wonderful breakaway goal after 54 minutes. This time, Matip did well to get his heel in the way of March’s cross reaching Welbeck and within seconds his side were up the other end of the pitch to score.

Henderson mounted the counter by finding Thiago and he slipped a pass into Diaz’s slipstream down the left.

The Colombian looked up as he approached the penalty area and from his pass to Firmino the Brazilian did brilliantly to turn past Dunk with his right foot and then fire in with his left.

Brighton gave a little reminder they weren’t finished as Welbeck wriggled into the box and was only blocked by a perfectly-timed tackle by Virgil van Dijk.

But it was clearly the home side in the ascendancy as the autumn sunshine and they took the lead after 63 minutes with Alexander-Arnold providing an assist.

His inswinging corner carried to the danger zone with pace and a panicked Sanchez came out to punch the ball against his own player, Webster, and it rolled into the net.

The rest of the Liverpool team ran over to Alexander-Arnold to celebrate as his difficult week looked to end on a high.

Instead, the party atmosphere was popped near the end. Mitoma got ahead of Alexander-Arnold and whipped a ball into the penalty area that evaded by van Dijk and Welbeck.

Trossard at the far post however made no mistake and finished with such power Alisson could only palm into the roof of the net. As the visitor’s bench punched the air, Trossard became the first away player to score an Anfield treble in the league since Arsenal’s Andriy Arshavin in 2009.