The ‘Doublehead Eagle of the North’ have confirmed the acquisition of the lanky Ghanaian sharpshooter, and will quickly be weaved into the matchday squad ahead of their Pan-Hellenic Women’s Football Championship (Greek A Division) game against Kastoria on Sunday, January 29. 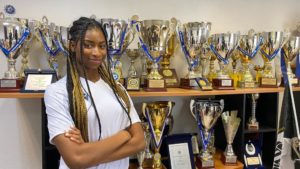 Sampson, 20, has been a key figure for Michigan-based Oakland University women’s team –  Golden Grizzlies, where she is currently studying.

Between 2018 through to 2020, Sampson, 20, established herself as a regular starter and a queen defenders nightmare for Hammarby IF women’s team in the Damallsvenskan, which is the highest division of women’s football in Sweden

PAOK are sitting top of Group A of the Greek A Division women’s Championship with 24 points as they aim to win the 2022/23 league title.